To combat the heavy bombers, the Fw 190 was modified with bolt-on 5 mm armor plates called "Panzerplatten" on the fuselage sides. Additional 30 mm armored glass panels were added on the canopy and extra glass was added to the windshield quarter-panels. The outboard 20 mm wing guns were replaced by HK 108 30 mm cannons. This combination was the Fw 190 A-8/R8 "Sturmbock" (Ram). In an effort to save some weight, the 13 mm machine guns that were mounted over the engine were often removed. 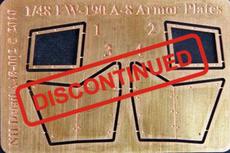